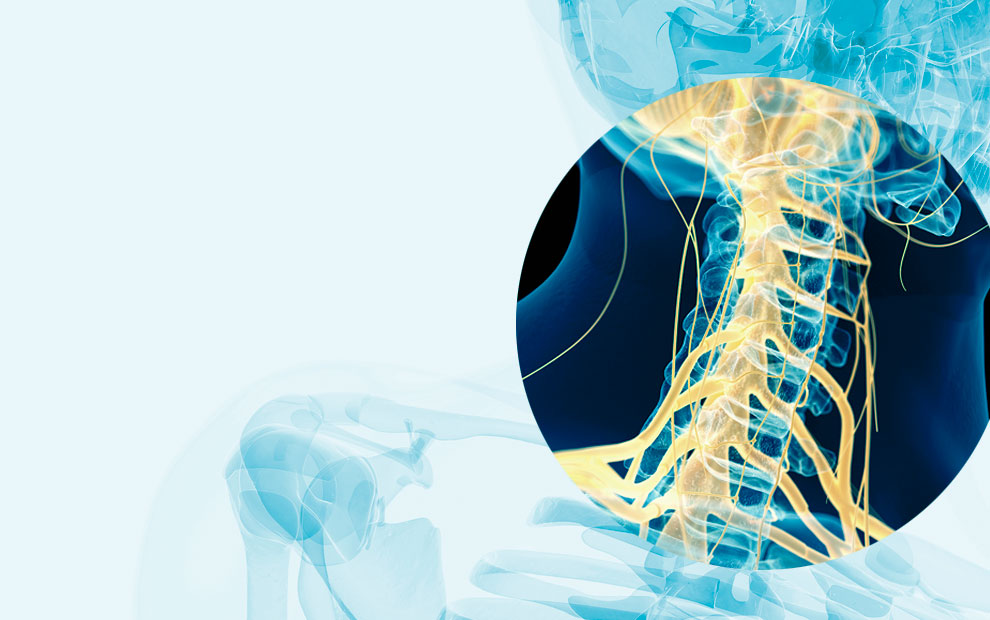 A team of Salk scientists led by Professor Martyn Goulding has been awarded $14.3 million over five years by the National Institutes of Health (NIH) to create a high-resolution atlas of how the mouse brain generates and controls skilled forelimb movements, such as reaching and grasping. This effort will provide a better understanding of not only how the brain controls movement, but also how it is affected by neurological diseases and spinal cord injuries that compromise arm, wrist and hand function. Injuries and disorders affecting spinal cord function impact everyday life. Yet, in order to develop new treatments, scientists must understand the fundamental biology of how the spinal cord works. To address these questions, Goulding will lead a spinal cord circuit team, which will include Professor Samuel Pfaff, Professor Tatyana Sharpee, Associate Professor Axel Nimmerjahn, and Assistant Professor Eiman Azim, all from Salk, along with Professor David Golomb of Ben-Gurion University of the Negev, in Israel, to tackle the underlying biology that controls arm movement. Within the neck lies a region of the spinal cord called the cervical spine. Brain circuits within the cervical spine control skilled arm, wrist and hand actions, such as throwing a dart or playing a guitar. Very little is known about the composition and structure of these circuits. With support from this grant, the team will create a high-resolution database with information about how the neurons communicate with one another and how each neuron contributes to skilled movement. The database will also include information about the neurons’ molecular and electrophysiological properties, which will provide a better understanding of the makeup of each cell. Lastly, the researchers will develop testable predictive models of each neural loop to explore the network of interactions that occur to move a limb. Read News Release

Professor Martyn Goulding has received the National Institute of Neurological Disorders and Stroke Outstanding Investigator Award, which will grant him $9.5 million dollars over the next eight years to further his pioneering studies on sensorimotor circuits in the spinal cord that are important for touch, itch and pain. Goulding, who holds the Frederick W. and Joanna J. Mitchell Chair, will be able to leverage these findings to develop a better understanding of how the spinal cord operates at a cellular level. More importantly, this award will enable his lab to take a high-risk, high-reward approach to address some of the fundamental challenges in the field that require a long-term investment and allow for the discovery of mechanisms that can then be used to develop novel therapeutic approaches for chronic disorders, such as itch, pain and spinal cord injury.

Three NIH BRAIN Initiative grants will support four Salk scientists in their efforts to make new discoveries in neuroscience: Nicola Allen, an associate professor and holder of the Hearst Foundation Developmental Chair, and Joseph Ecker, a Howard Hughes Medical Institute investigator, professor and director of Salk’s Genomic Analysis Laboratory, were awarded a three-year, $4.6 million grant to identify what factors regulate the development and regional specialization of support cells in the brain, called glial cells, and generate new tools to target these cells. Glial cell dysfunction is implicated in a multitude of diseases, including Alzheimer’s disease. Eiman Azim, an assistant professor and the William Scandling Development Chair, was awarded a five-year, $2.9 million grant to identify neural circuits that establish the speed and precision of skilled limb movements, such as reaching and grasping. The project aims to shed light on more effective diagnosis and treatment of motor system disease and injury. Joseph Ecker and Margarita Behrens, a research professor and member of Salk’s Computational Neurobiology Laboratory, were together awarded a three-year, $5.4 million grant to study the epigenomes of cell types and gene control elements in different regions of the human brain. Read News Release 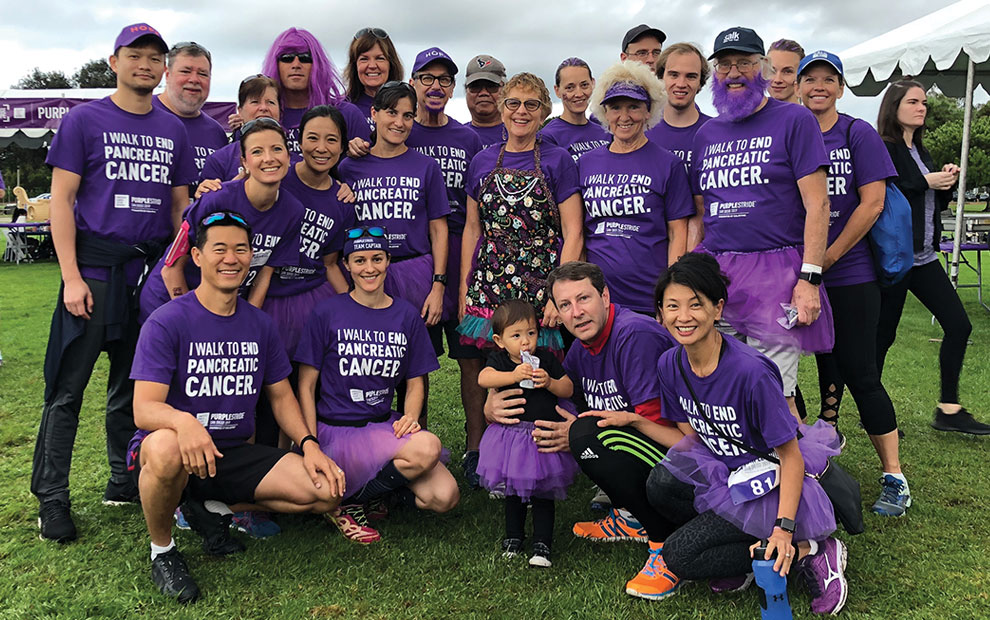 Pedal the Cause makes largest contribution to funding cancer research 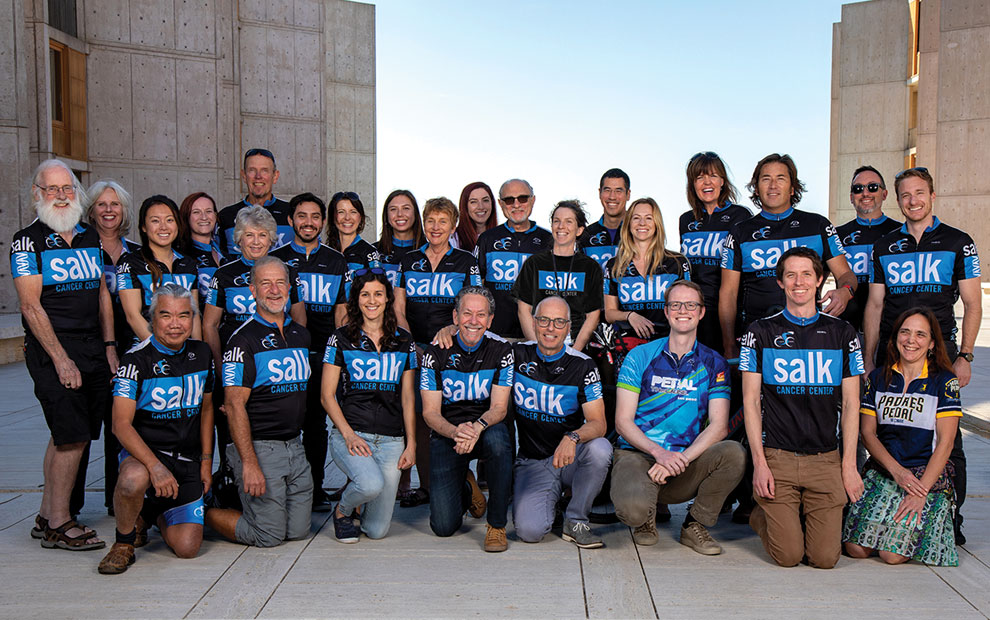 The 2019 Salk Cancer Center team included 54 riders, walkers, runners and volunteers who joined together with more than 3,000 others in an effort to support cutting-edge research to accelerate cures for cancer. The event took place on November 16, and highlights included riding over the Coronado Bridge, through Coronado and on the Silver Strand. All cycling routes, which ranged from 25 miles to 100 miles, ended on center field at Petco Park in downtown San Diego. 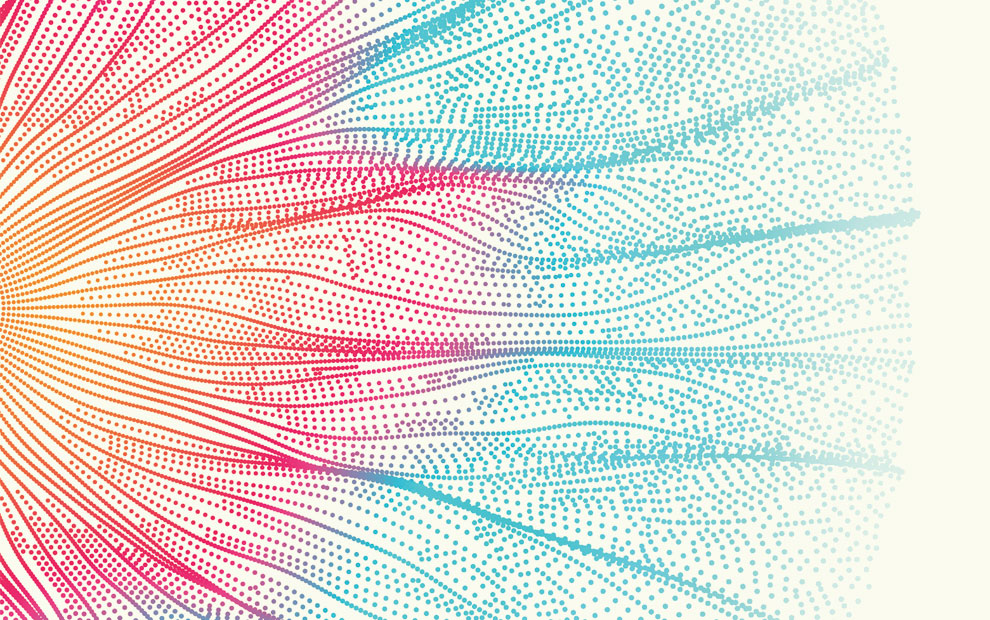 The program, launched in 2006 by then-Board chair Irwin Jacobs and his wife, Joan, embodies the vision and spirit of the Institute that bears Jonas Salk’s name. The Innovation Grants Program, now supported by a number of forward-thinking donors, is designed to fund out-of-the-box ideas that hold significant promise but may not yet have the track record to attract attention from more traditional funding sources. Innovation grant awards have enabled many Salk researchers to garner additional investments from prominent grant-makers to continue to pursue potentially life-changing discoveries. Below are the awards announced in the past year (winter of 2018–summer of 2019).

Professor Juan Carlos Izpisua Belmonte seeks to determine whether epigenetic inheritance can take place in mammals across generations. If possible, this would mean that the experiences that have shaped the genetic expression of parents (e.g., adaptations to environmental challenges) could be passed to children—a significant question in evolutionary biology, which remains unanswered. Associate Professor Sreekanth Chalasani, Postdoctoral Fellow Chen-min Yeh and Staff Scientist Gerald Pao seek to answer the question of whether or not brain activity can be used to control a robot. They will leverage advanced live microscopy techniques, in addition to supercomputer technology, to see whether or not the brain activity of zebrafish larvae can control a fish robot. Professor and Laboratory Head David Schubert and Staff Scientist Antonio Currais are identifying new drug candidates for Alzheimer’s disease using screens for mitochondrial dysfunction. Specifically, they will look at a large library of plant extracts that have pharmacological value to see whether any have protective traits that are able to preserve mitochondrial function—one of the earliest clinical challenges in Alzheimer’s. Director and Professor Joseph Ecker is working to develop a method that allows researchers to record the transcriptional activity within a cell into the genetic code so that they can analyze the cascade of transcriptional events that occurs during an organism’s development as well as cell reprogramming. Professor Edward Callaway is undertaking a project that will develop innovative methods for flexible, high-throughput analysis of specific brain-cell types across any species, including humans, that can identify the genetic enhancers that restrict expression of genes that have been passed from one cell (or whole organism) to another.

Directors and Professors Ronald Evans and Susan Kaech and Associate Professor Ye Zheng will lead a team in exploring if a healthy diet and exercise reduces levels of inflammation and renders tumor cells more sensitive to the immune system, with the goal of expanding the efficacy of immunotherapies. Professors Alan Saghatelian, Joseph Noel and Jan Karlseder will undertake a multi-pronged approach to develop small-molecule inhibitors of the DNA repair regulator CYREN, with the goal of specifically sensitizing tumor cells to genotoxic therapy.

Assistant Professor Kenta Asahina was named The Rose Hills Foundation’s 2019-2020 Innovator Grant Program awardee, in coordination with Salk’s Innovation Grants Program. The award provides $100,000 for Asahina to explore a novel approach to studying aging. Asahina, who is holder of the Helen McLoraine Developmental Chair in Neurobiology, will study how the nervous system can contribute to life span difference between sexes. Females in many animal species, including humans, live longer than males. Asahina’s work aims to provide a novel paradigm for studying aging, with a potential to understand the biological mechanisms that specify human lifespan. 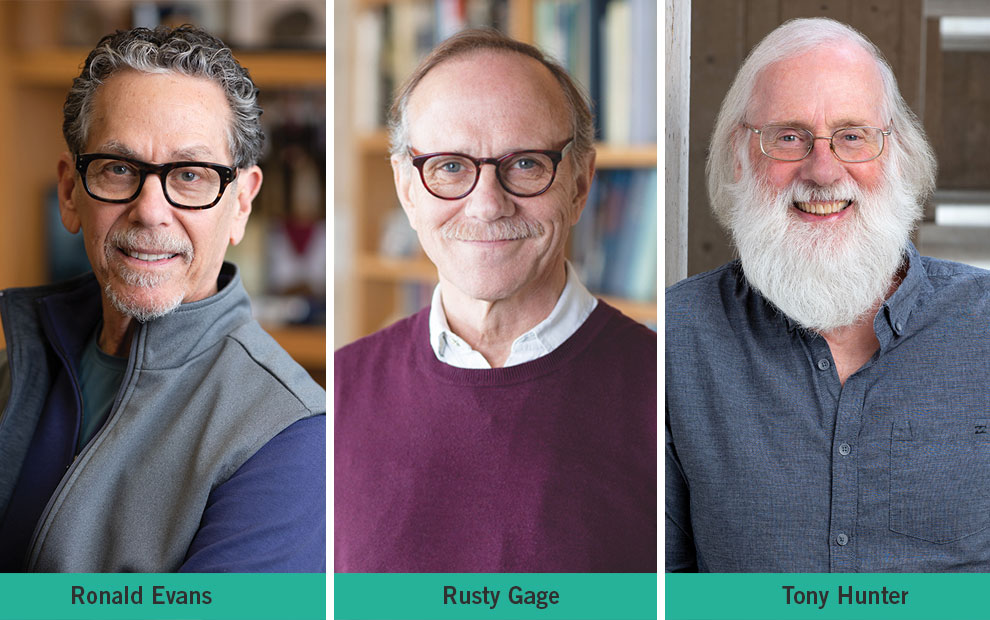 In August 2019, a new, comprehensive study published in the journal PLOS Biology ranked Salk professors Ronald Evans, Rusty Gage and Tony Hunter in the top 0.01 percent of the top 105,000 scientists worldwide, based on citations. The faculty are world-leading experts in the fields of metabolism, neuroscience and cancer. 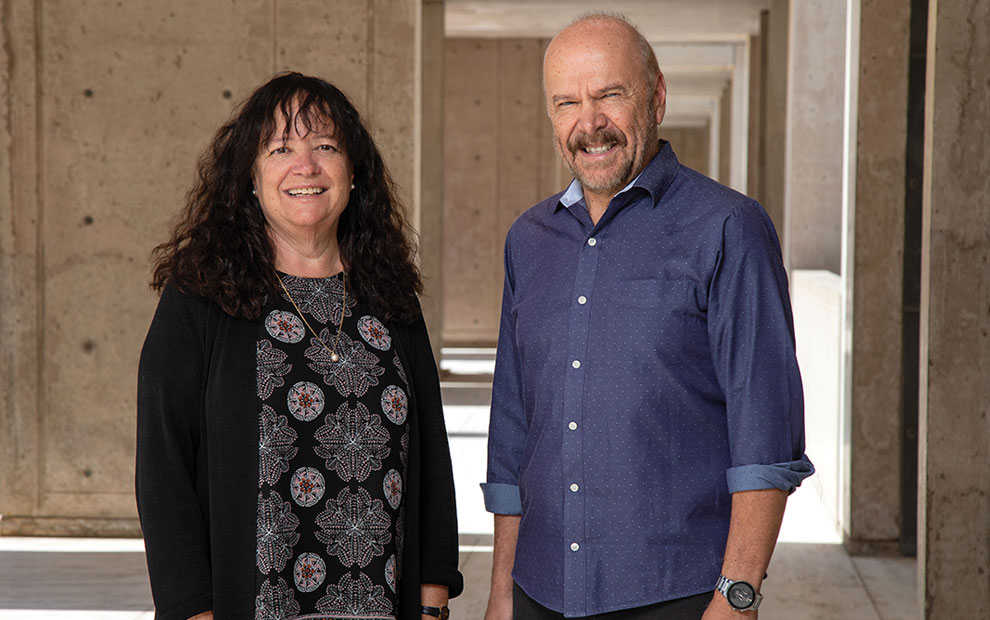 Joseph Ecker, professor and director of Salk’s Genomic Analysis Laboratory, and Margarita Behrens, a research professor in Salk’s Computational Neurobiology Laboratory, will receive more than $1.6 million over three years as part of a Seed Networks grant from the Chan Zuckerberg Initiative (CZI). The award will support their work to incorporate data representing human brain diversity into the Human Cell Atlas, a comprehensive database that covers all of the cell types in the human body. Their cutting-edge research will enable a better understanding of the human brain in health and disease. 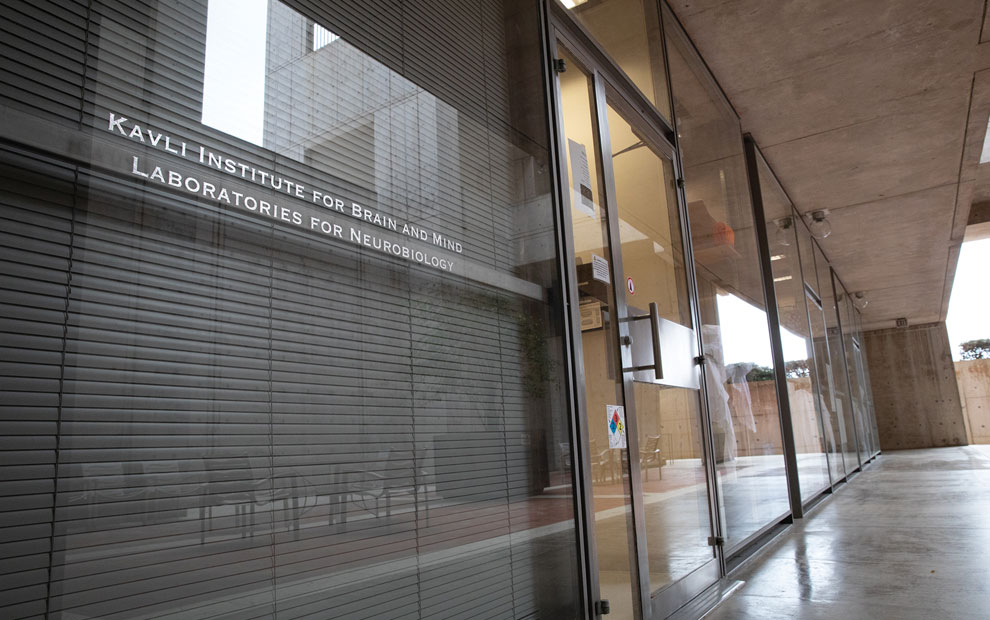 In August, The Kavli Foundation committed $3 million to support ongoing neuroscience research at the Salk Institute as part of the joint UCSD-Salk Kavli Institute for Brain and Mind (KIBM). The gift—matched by an additional $3 million from Salk—brings $6 million to the KIBM endowment to enable faculty in neuroscience to work on questions whose answers will have the most impact in the field.

The Kavli Institute for Brain and Mind was established through a $15.5 million endowment commitment from The Kavli Foundation, shared between Salk and UC San Diego. KIBM’s mission aims to support research that furthers an understanding of the origins, evolution and mechanisms of human cognition, from the brain’s physical and biochemical machinery to the experiences and behaviors called the mind.

The Salk Institute is home to many of the world’s leaders within the field of neuroscience, which includes computational neuroscience, spinal circuitry, pain, movement, learning, vision, psychiatric and developmental disorders, and age-related decline.

Tye’s lab seeks to understand the neural-circuit basis of emotion that leads to motivated behaviors such as social interaction, reward-seeking and avoidance. Her lab employs a multidisciplinary approach to find mechanistic explanations for how these emotional and motivational states influence behavior in health and disease.

“The Kavli Institute for Brain and Mind is a nexus for neuroscience research, helping to facilitate collaborations across two world-renowned institutes—Salk and UC San Diego—as well as other neuroscience research centers around the world,” says Stephanie Albin, science program officer at The Kavli Foundation.