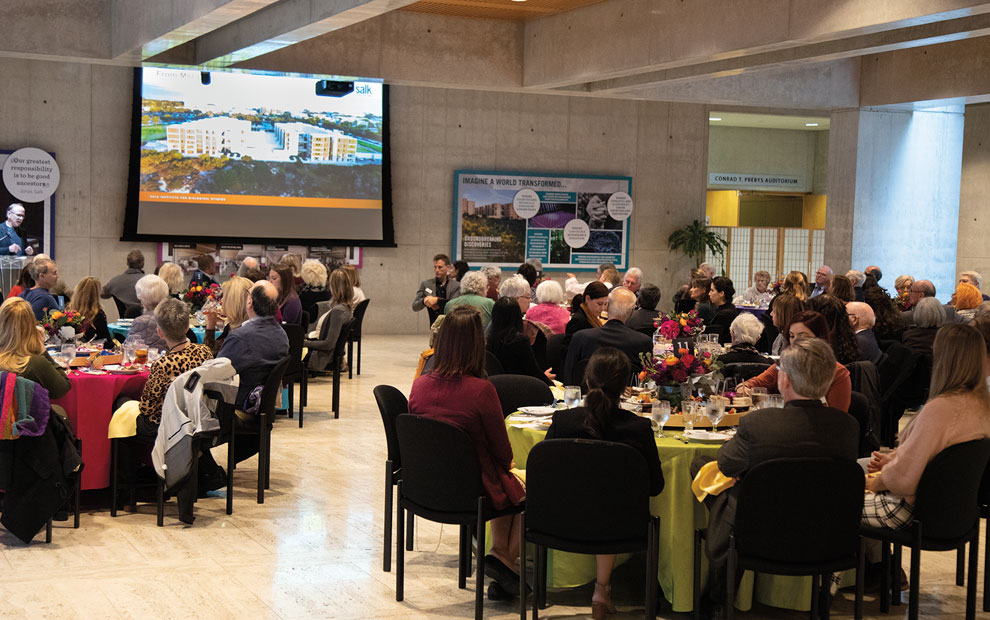 On November 20, Salk supporters were honored for their generous contributions leading to a productive year of science in 2019 at the Institute. Salk scientists shared updates on current research and how donor philanthropy accelerates scientific discovery. The event was attended by Salk leaders, Board members, faculty, staff, volunteers and community donors. 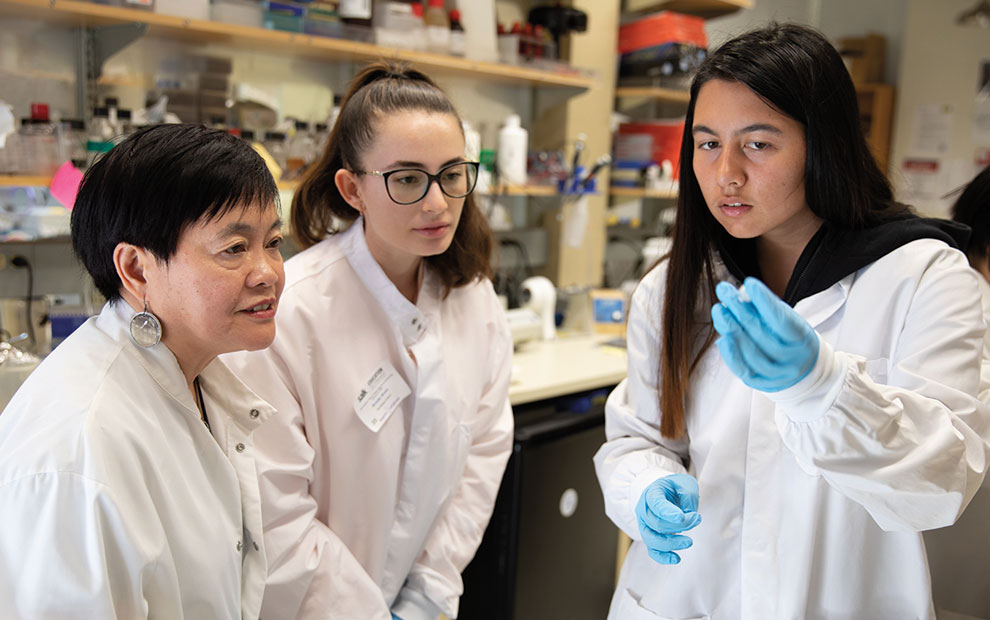 On February 29, Salk faculty and staff brought science to life for the next generation of scientists with the 30th March of Dimes High School Science Day. The half-day annual event is designed to encourage high school students to consider an exciting career in science and research. The Institute welcomed about 300 students from all over San Diego who met Salk scientists and received behind-the-scenes, interactive lab tours.

Shadel shares the basics of mitochondria 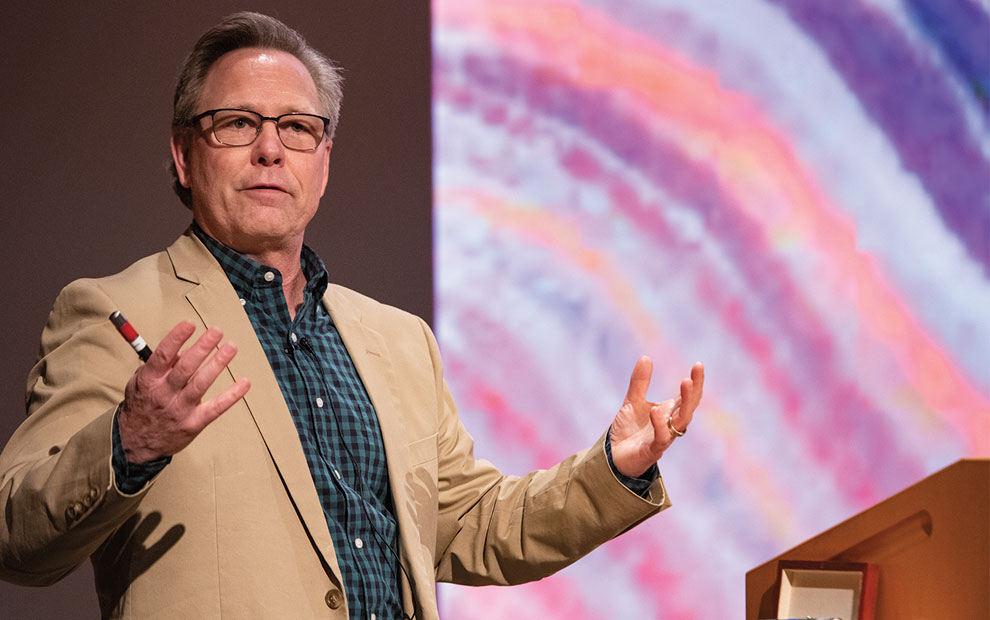 Highlighting one avenue of research as part of the Institute’s Optimizing Aging Initiative, Salk Professor Gerald Shadel shared details about his work on mitochondria, the powerhouses of cells. On February 12, Shadel, who holds the Audrey Geisel Chair in Biomedical Science, discussed the role mitochondria and mtDNA play in aging and disease to a full auditorium. The Back to Basics lecture series offers the public the opportunity to hear from the Institute’s world-renowned scientists throughout the year. 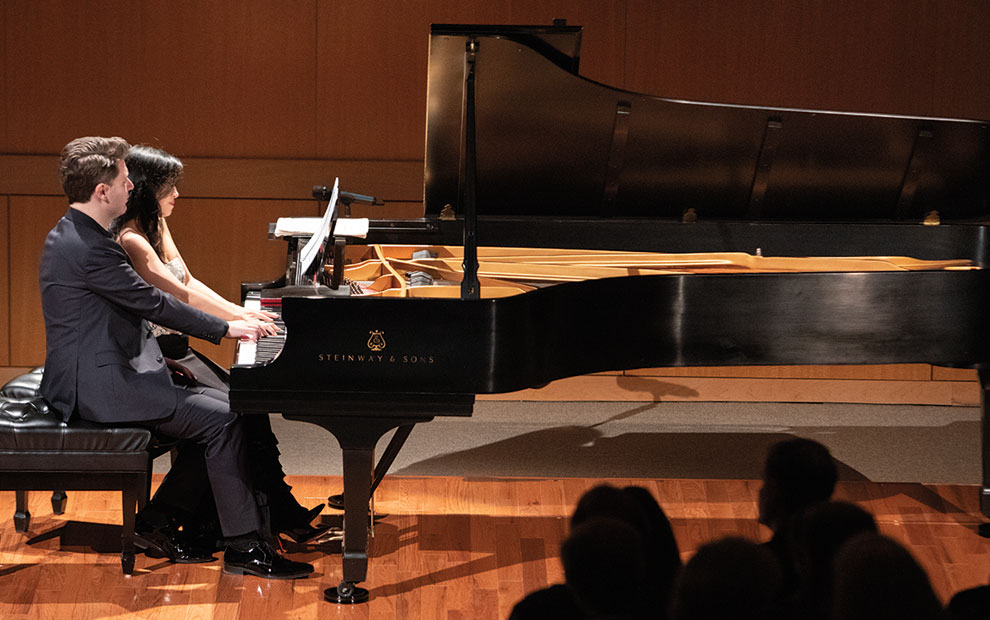 The Salk Science & Music Series played on with two events in the lineup from the current season. The first event on November 3, 2019, delighted guests with the science of Professor Gerald Shadel and music of pianist Fei Fei Dong. Attendees were treated to the beautiful sounds of Alessio Bax and Lucille Chung on piano on January 12, 2020, and an investigation on the ability of plants to help mitigate climate change by Salk Professor Joseph Noel. 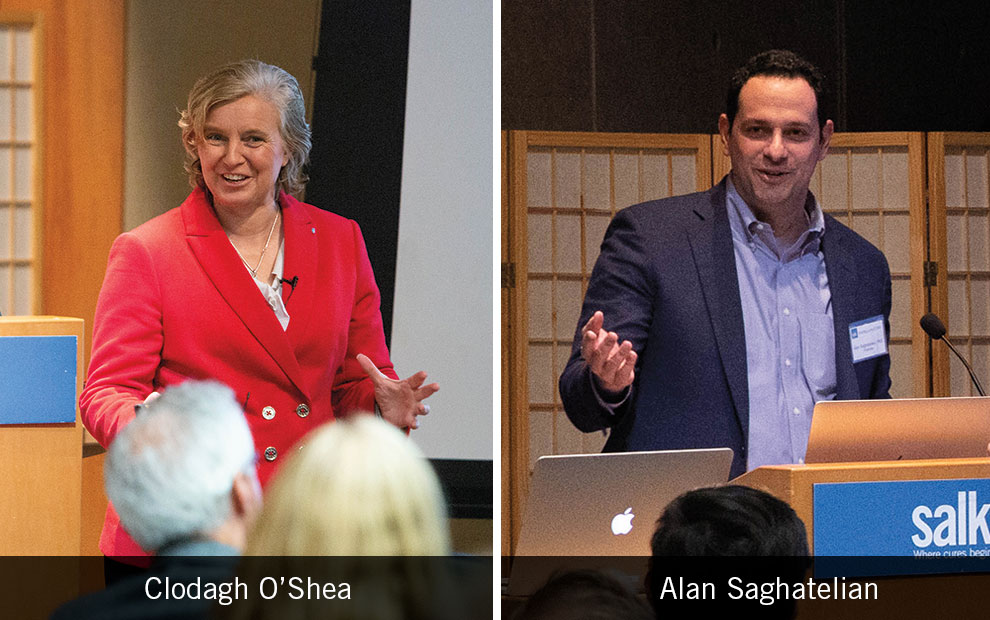 On February 26, Salk Professors Clodagh O’Shea and Alan Saghatelian spoke with the Salkexcellerators group about their novel research seeking to unravel the complexities of disease and leverage the knowledge to design biological devices as groundbreaking precision medicines. Salkexcellerators are the next generation of community members who support scientific discovery at Salk and engage with scientists through a full year of activities. 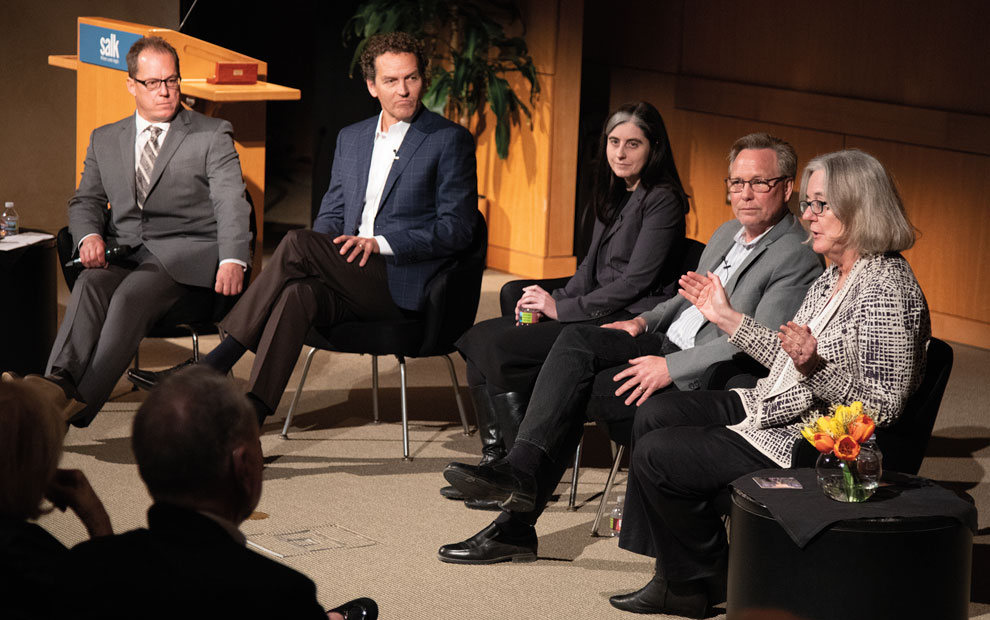 On November 14, the Salk Institute introduced its Optimizing Aging Initiative.

Aging is the biggest risk factor for most diseases, including Alzheimer’s, cancer, diabetes and others. The new initiative uses a multidisciplinary approach to understand the fundamentals of aging and how interactions between the major systems of the body contribute to age-related diseases. 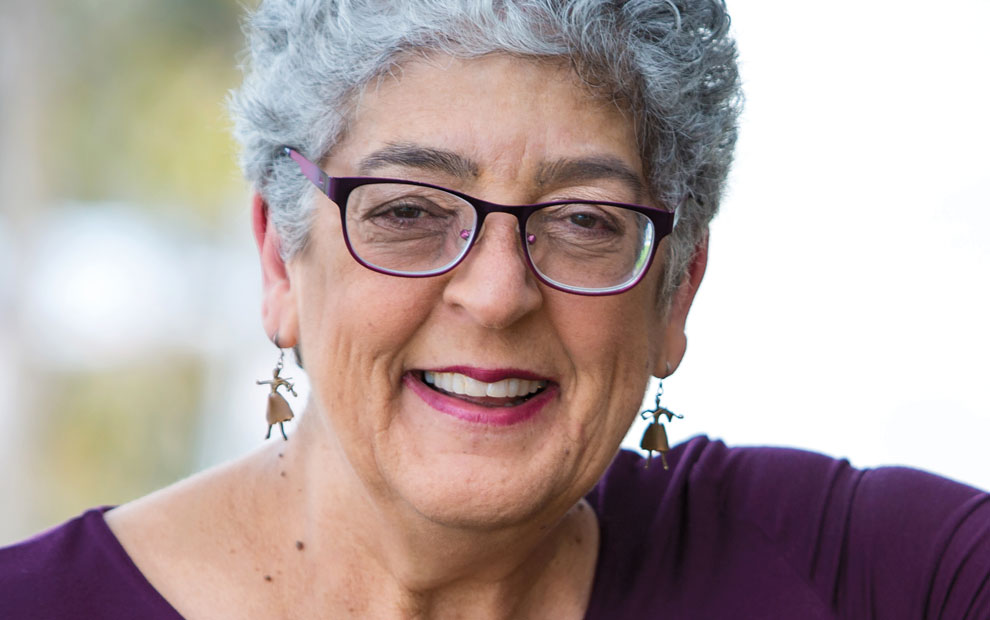 Professor Joanne Chory was honored with the Trailblazer Award from Salk Women & Science. The award recognizes outstanding achievements made by women in the STEAM (Science, Technology, Engineering, Art and Mathematics) fields. Recipients have pioneered changes within the STEAM fields as innovators, groundbreakers, collaborators and mentors. They have dedicated their lives to making significant advances in both their professional and personal realms. Trailblazers forge their own paths to achieve their vision.

Chory’s efforts leading Salk’s Plant Molecular and Cellular Biology Laboratory, in addition to her roles as a professor, a Howard Hughes Medical Institute investigator, and the Howard H. and Maryam R. Newman Chair in Plant Biology, have been widely acclaimed. She was awarded the 2018 Breakthrough Prize in Life Sciences and was made a Fellow of the National Academy of Inventors. Her work leading Salk’s Harnessing Plants Initiative, which focuses on creating plants that store more carbon in their root networks to help mitigate the effects of climate change, was instrumental in the Institute being chosen in 2019 for funding of more than $35 million through The Audacious Project, a highly competitive program housed at TED. 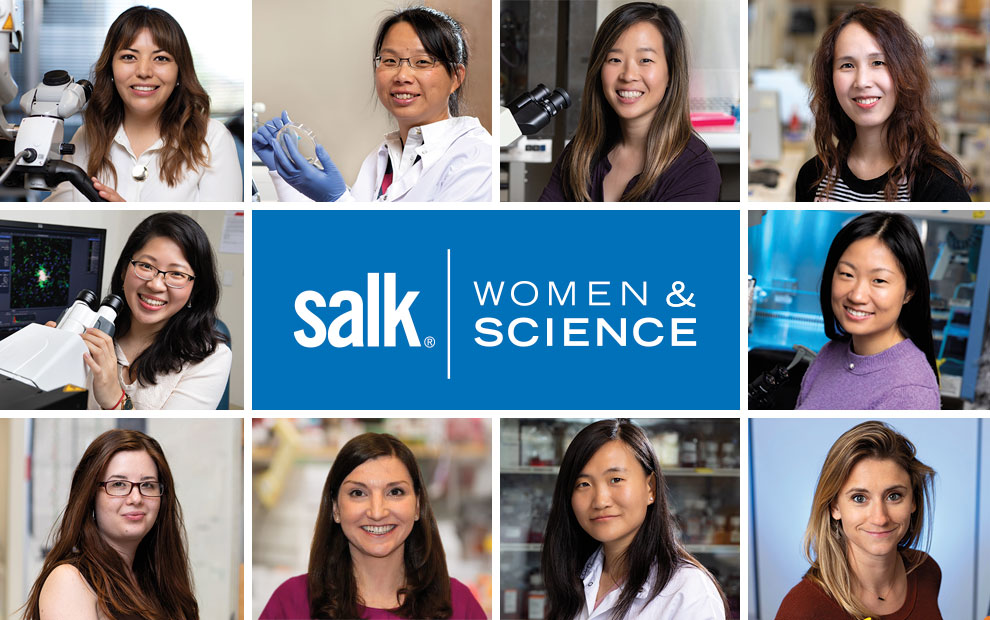 While a public event lauding the Women & Science recipients was not possible this year, the Institute is proud to share and celebrate their achievements. Every year, the program provides crucial support to graduate students and postdoctoral researchers to pursue high-risk, high-reward research in stages too early to attract traditional funding. The awards are targeted toward supporting future scientific leaders who will also actively foster the increased participation of women and girls in science.

BIANCA BARRIGA | PFAFF LAB
Investigating effects of exercise training on spinal neural networks
Barriga will examine the neurons within the mouse spinal cord that help produce movements—such as walking and running—to better understand what separates the ordinary athlete from runners such as Florence Griffith Joyner, the fastest woman in the world.

ANDREEA MANOLE, PHD | GAGE LAB
Neuroinflammation associated with genetic defects in phospholipase A(2) and glucocerebrosidase
Manole will use induced pluripotent stem cells derived from patients with mutations in two genes involved in fat metabolism (PLA2G6 and GBA) to study metabolism and neuroinflammation in the context of neurodegeneration, which could lead to improved therapeutic strategies for diseases.

SEJ CHUNG, PHD | ENGLE LAB
Defining the role of CA19-9 in the pancreatic microbiome
Chung will investigate how levels of CA19-9, a sugar molecule associated with one of the deadliest cancers—pancreatic cancer—affects gut bacteria populations. The work could reveal biomarkers for early detection and possible therapeutic targets for pancreatic tumors.

SHARON (HSIANG-HSUAN) HUANG, MD | JIN LAB
Dissecting the role of sensorimotor feedback in action sequencing
Huang will investigate how the brain integrates feedback to control behavior, which will shed light on neurological and psychiatric diseases, such as schizophrenia, that involve difficulty controlling actions.

ANNELISE SNYDER, PHD | KAECH LAB
Determining the role of microglial metabolic reprogramming in linking infection to Alzheimer’s disease
Alzheimer’s disease is associated with previous viral infections, although researchers do not understand precisely how. Synder will examine how viral infections may reprogram how brain-resident immune cells, called microglia, use energy sources in a way that promotes the development of disease.