Symphony, Leaslie Odom, Jr. light it up at Concert Under the Stars 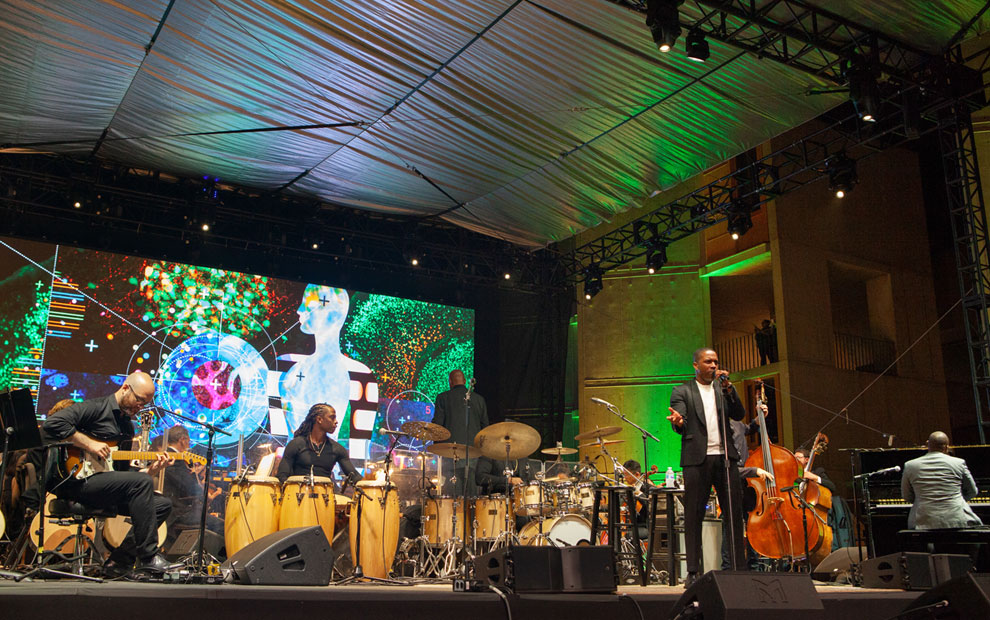 On August 25, 2018, the Salk Institute once again transformed into a stunning musical venue for the 23rd annual Symphony at Salk.

Special guest artist Leslie Odom, Jr., a Tony Award winner for his role as Aaron Burr in the Broadway smash hit Hamilton, wowed 750 guests and 100 volunteers with his charm and dazzling vocal skills during the concert under the stars. Spectacular lighting in the courtyard highlighted the art of Salk’s biophotonics imagery, the paintings of Françoise Gilot and the live shots of the performance by Odom and the San Diego Symphony.

As the sun slowly dipped toward the Pacific horizon behind the stage, guests enjoyed camaraderie, a champagne reception and a gourmet dinner before the concert. “Symphony at Salk is a very special event that inspires and uplifts the spirits of all who attend while typically raising more than $1 million for Salk’s Education Outreach program and scientific discovery,” says Salk President Rusty Gage.

High school scholars immerse themselves in science at Salk 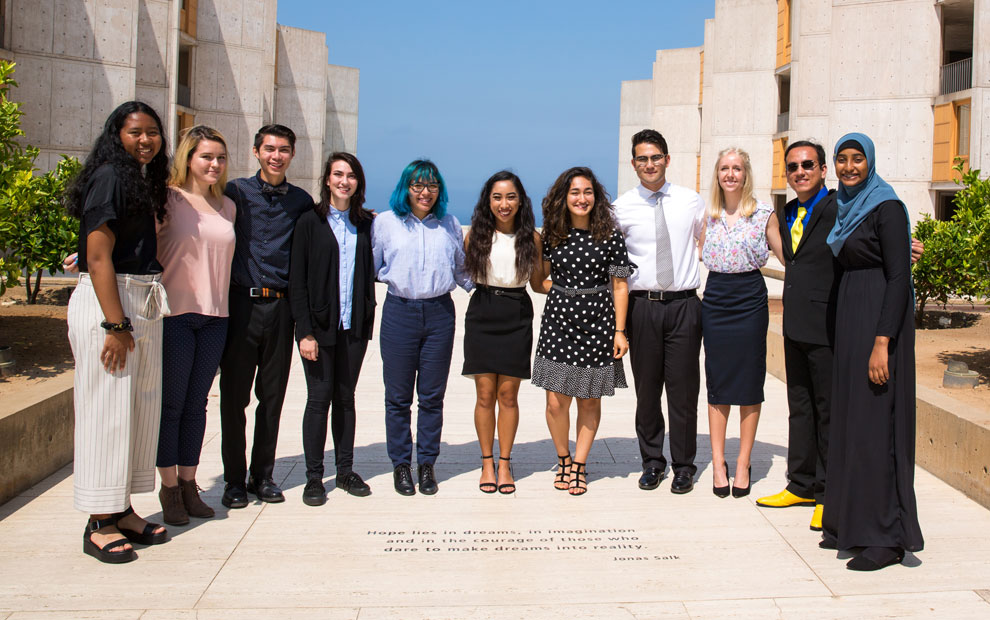 This past summer, high school students spent eight weeks at the Salk Institute, thanks to Education Outreach’s Heithoff-Brody Scholars Program. The students conducted hands-on work in a Salk research lab, supervised by a Salk faculty member. Students learned how to formulate and test hypotheses, prepare experiments, and draw conclusions from their results. At the end of the program, students presented their research projects to their mentors, lab members and families. 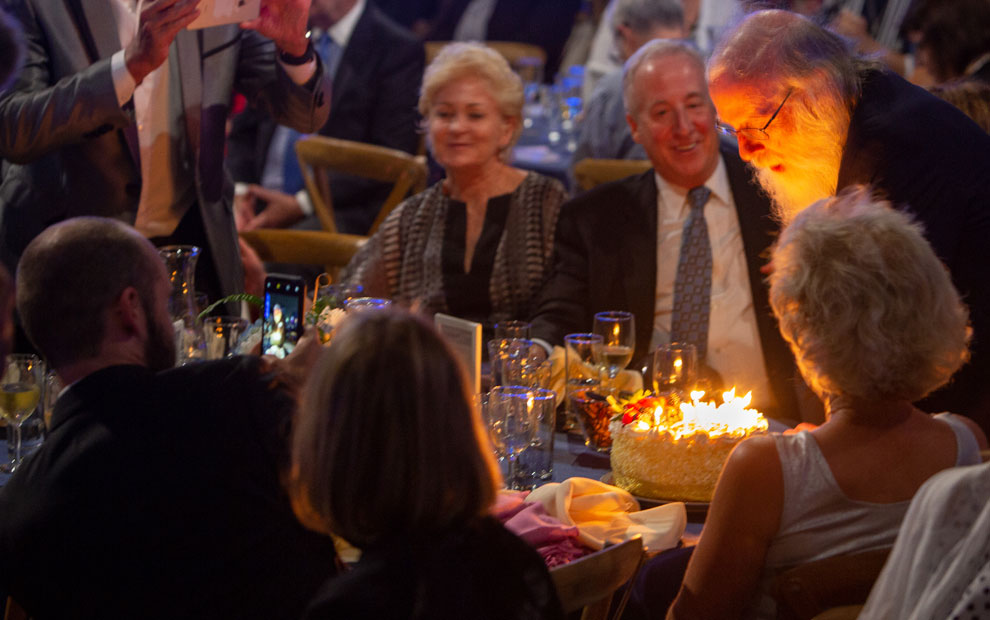 Family, friends and colleagues joined Salk American Cancer Society Professor Tony Hunter on August 25 at the Sanford Consortium for Regenerative Medicine to celebrate his 75th birthday. Hunter, holder of the Renato Dulbecco Chair in the Molecular and Cell Biology Laboratory, came to Salk in 1971 as a postdoctoral fellow and joined the faculty just a few years later. 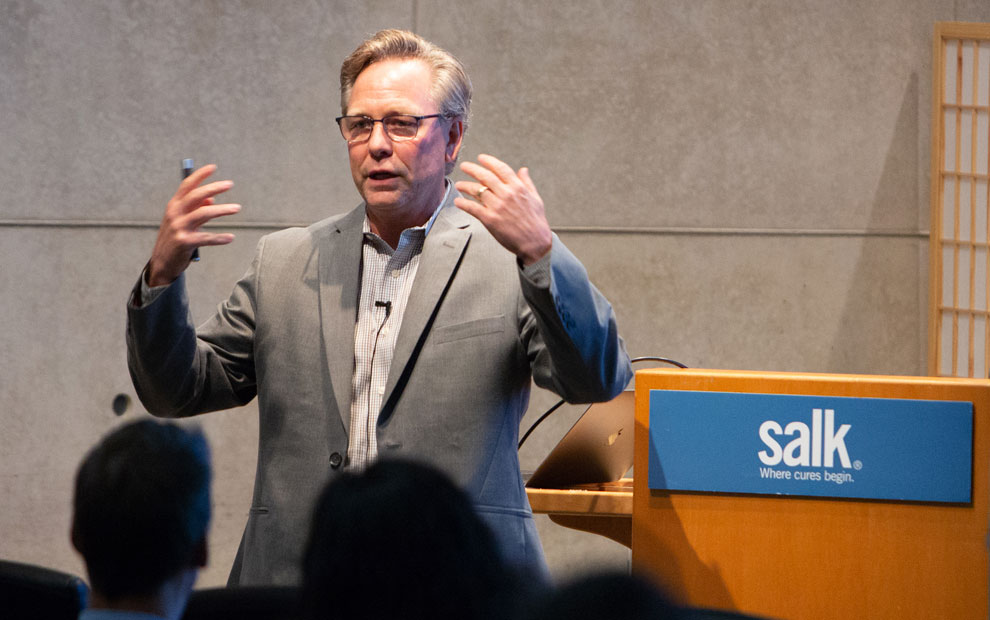 On October 3, 2018, Salk Professor Gerald Shadel, holder of the Audrey Geisel Chair in Biomedical Science, spoke to the Salkexcellerators group about his work on mitochondria in aging, disease and the immune system. Shadel’s team reports that for mitochondria—the energy factories in your cells—brief exposures to stressors can be beneficial, by prompting the cell to trigger the sustained production of antioxidants. Salkexcellerators are the next generation of community members who commit to supporting scientific discoveries and engage with Salk science through a year-round calendar of special events. 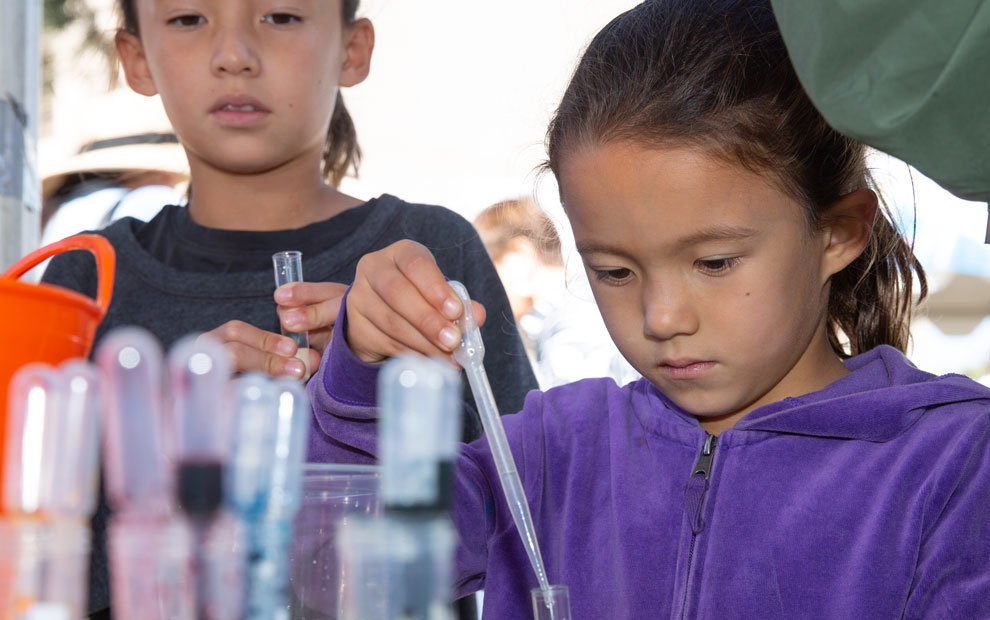 The Salk Institute opened its doors to more than 2,000 members of the community who attended Explore Salk on October 27. The free open house featured science booths, hands-on experiments for kids, self-guided architecture tours and poster sessions by high school students. The event also celebrated the history of the Institute and its founder, Jonas Salk, with a screening of The Shot Felt ’Round the World, a documentary about the development of the first safe and effective polio vaccine. Featured throughout the day were talks about Salk’s Harnessing Plants and Conquering Cancer Initiatives, the science of architecture, and the use of circadian rhythms to improve human health and help us age well. About 100 volunteers helped make this a fun and educational day for our visitors. 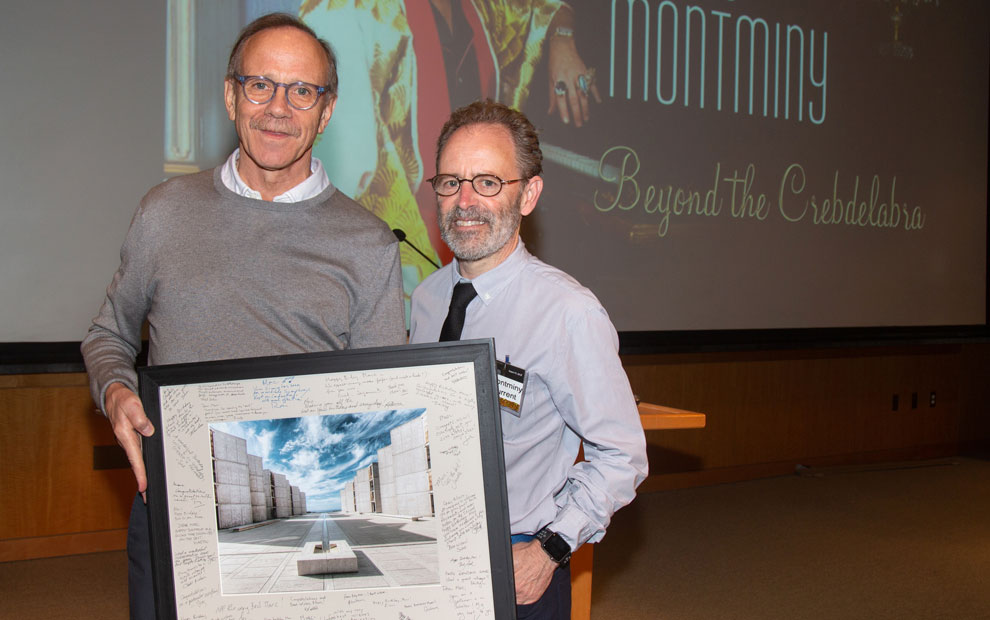 Coinciding with Salk Institute Professor Marc Montminy’s 62nd birthday, colleagues past and present gathered from around the globe to honor him at an August 31 symposium. The event highlighted the progress of his lab and its research on understanding signaling molecules that help keep all the cells in the body on the same page when it comes to metabolism.

Salk President Rusty Gage (left) presented Marc Montminy with a photo of the Institute, signed by many who have worked alongside him.

Panda goes Back to Basics 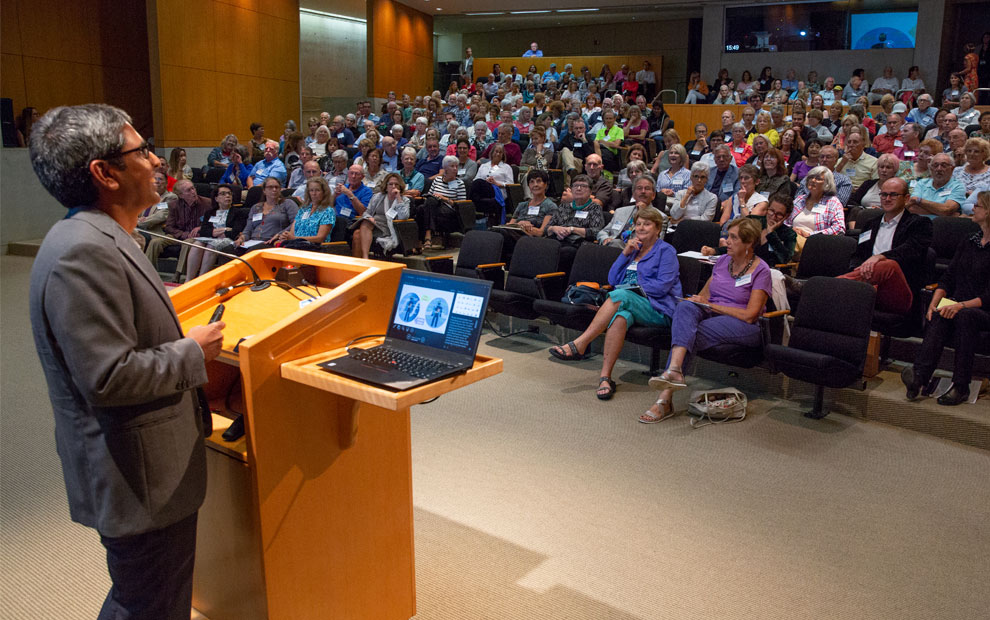 On September 12, 2018, Professor Satchin Panda presented his research on how the circadian clock relates to weight, the immune system and overall health to a packed house. The twice-yearly Back to Basics lectures introduce the Institute’s science to the general public. 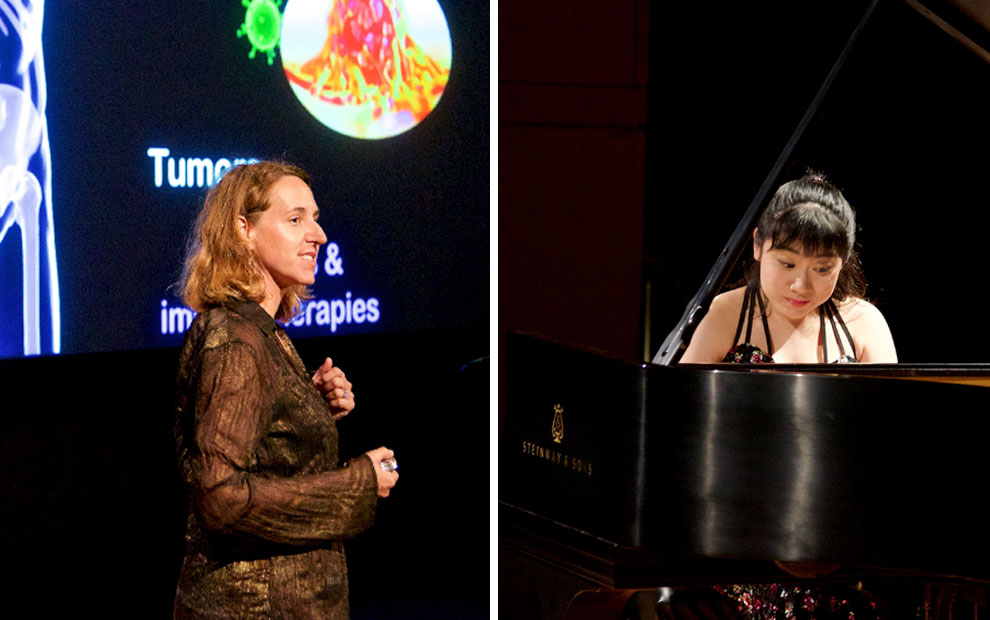 The sixth season of the Salk Science & Music Series got off to a rousing start with a performance by pianist Wei Luo on October 21, 2018, in the Conrad T. Prebys Auditorium. The series consists of four remarkable Sunday afternoons that bring together virtuosos from the worlds of science and music. Salk Professor Susan Kaech shared her scientific research for the opener and delivered fascinating insights into immunology. The series continues on February 24, 2019, with cellist Amit Peled, pianist Karen Joy Davis and Salk Professor Jan Karlseder.

Art of science on display at Women & Science showcase 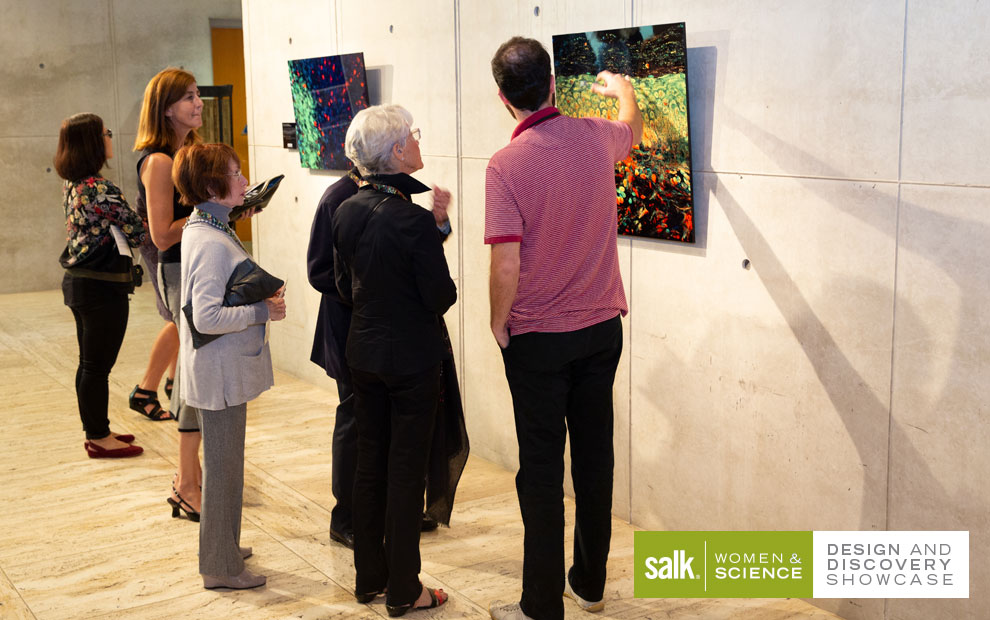 One way the Salk Institute continues the legacy of founder Jonas Salk is by celebrating the connection of the worlds of science and art. Salk Women & Science showed how those disciplines are often intertwined, with a unique event on October 10.

The annual Design and Discovery Showcase displayed 11 incredible microscopy images submitted by Salk scientists and selected as the top entries by a panel of judges. More than beautiful, these images illustrate scientific concepts explored by Salk researchers—concepts that may lead to cures. The winning image was submitted by Tong Zhang, a light-microscopy specialist in the Waitt Advanced Biophotonics Core.

The Design & Discovery Showcase event featured art and science presentations, a reception and an auction of the 11 stunning images.

Salk Women & Science is an ongoing program that connects women in the community with leaders in biological science and technology. The program provides a dynamic and vibrant forum in which community and business leaders and Salk’s women of science have an opportunity to gather as friends, entrepreneurs and researchers to discuss the latest discoveries in science and technology while inspiring more women to embrace scientific research as a focus of personal and philanthropic interest.