Martina and Dan Lewis give $2 million for cancer research 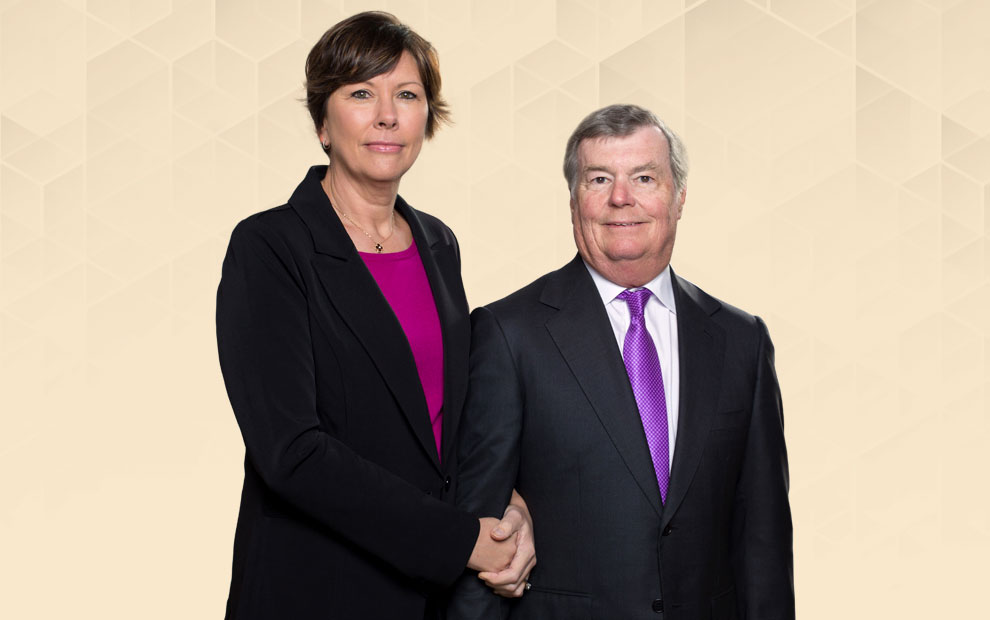 The Salk Institute recently announced a $2 million gift in support of its Conquering Cancer Initiative from Board of Trustees Chair Dan Lewis and his wife, Martina. The funds will be used to advance the Salk Cancer Center’s highest research priorities, including new investigations into five of the deadliest cancers: lung, pancreatic, brain (glioblastoma), ovarian and triple-negative breast. The gift made possible the recruitment of incoming Salk Assistant Professor Dannielle Engle, whose unique work on pancreatic cancer may lead to new treatments.

Lewis’ story was inextricably tied to Salk following his diagnosis with chronic myeloid leukemia (CML) in 2006. A diagnosis of CML had previously been akin to a terminal illness. But Salk Professor and former Cancer Center director Tony Hunter’s discovery of cellular switches called tyrosine kinase inhibitors led to the creation of the cancer drug Gleevec. Gleevec is used to manage CML as a chronic disease, preventing it from becoming fatal. 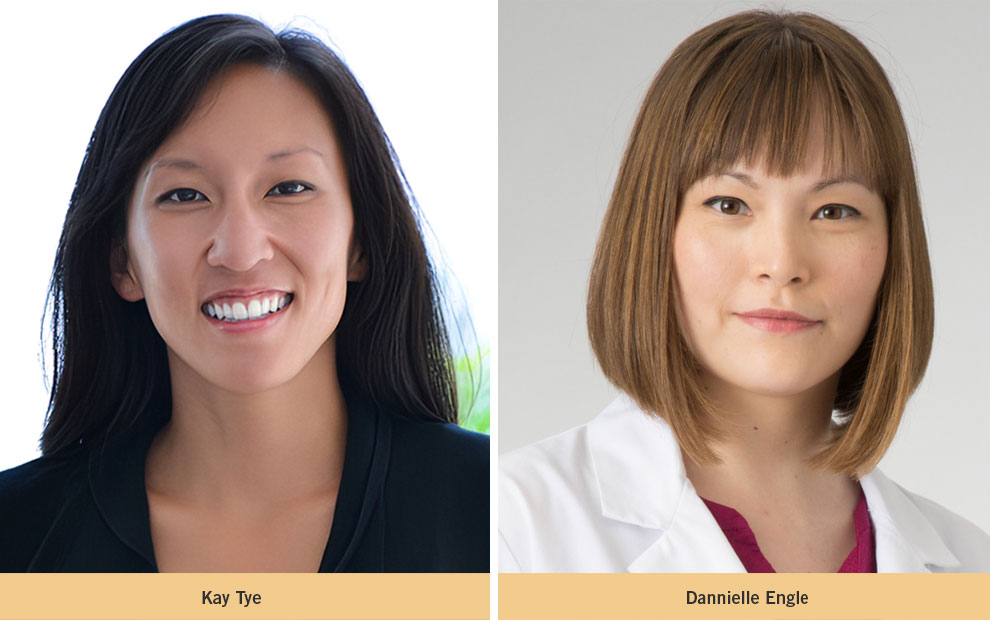 The Salk Institute announced that globally renowned neuroscientist Kay Tye will join its faculty in January 2019 as a full professor. She is currently an associate professor in the department of brain and cognitive sciences, part of the Picower Institute for Learning and Memory at the Massachusetts Institute of Technology (MIT).

Tye focuses on a wide variety of cutting-edge technologies and approaches to better understand the brain circuitry underlying emotion and motivation. Her discoveries are helping pave the way for more targeted and efficient treatments for brain disorders, such as addiction-related behaviors, attention deficit disorder, anxiety and depression. For example, she has examined how emotional states such as increased anxiety may increase the propensity for substance abuse by facilitating long-term changes associated with reward-related learning.

Tye is the recipient of numerous accolades and grants, including a Presidential Early Career Award for Scientists and Engineers; an NIH Director’s Pioneer Award; an NIH Director’s New Innovator Award; a Society for Neuroscience Young Investigator Award; the Daniel X. Freedman Prize; a McKnight Fellowship; and many others. She received her BS degree from MIT and her PhD from UC San Francisco, before working as a postdoctoral fellow at Stanford University and the Ernest Gallo Clinic and Research Center.

In addition, the Salk Institute is honored to welcome Dannielle Engle back to Salk as an assistant professor in the Salk Cancer Center. She is currently a senior fellow at Cold Spring Harbor Laboratory, in New York, where she focuses on the early detection and treatment of pancreatic cancer. Engle conducted research in the lab of Salk Professor Geoffrey Wahl for six years as part  of her doctoral program at UC San Diego.

Pancreatic cancer is one of the deadliest cancers because it is difficult to detect and is especially resistant to treatment. As part of her postdoctoral training with David A. Tuveson at Cambridge Research Institute (UK) and Cold Spring Harbor Laboratory, Engle developed miniature pancreas organ cultures (“organoids”) using both human and mouse cells to identify biomarkers and treatments for pancreatic cancer.

Engle holds a bachelor’s degree in biological sciences and Asian studies from Northwestern University and a doctorate in biological sciences from UC San Diego. She is the recipient of a California Breast Cancer Research Program Fellowship, a UC San Diego Chancellor’s Fellowship and a National Institutes of Health/National Cancer Institute Career Transition Award, among other honors. She begins her appointment in January 2019. 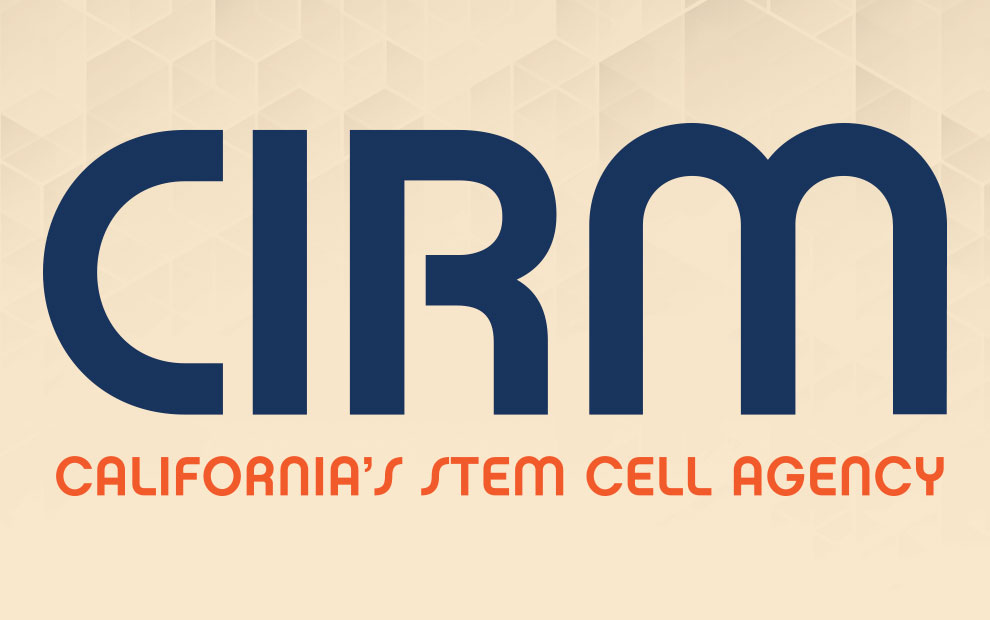 The lab of Ronald Evans has received a $1.6 million grant from the California Institute for Regenerative Medicine (CIRM) to develop a new diabetes therapy called immune tolerant human islet-like organoids (HILOs). These transplantable, insulin-producing human pancreatic islet cells, created from pluripotent stem cells, could help dramatically improve quality of life for people with type 1 diabetes. The award is part of CIRM’s Discovery Quest program, which invests in research that can be rapidly translated into treatments. 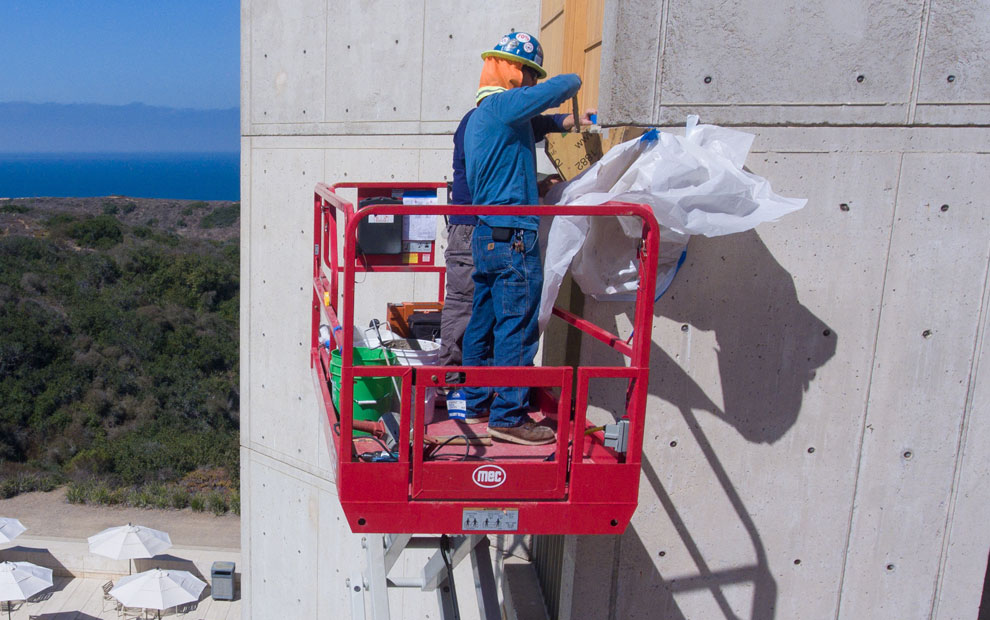 As part of its Keeping It Modern initiative, the Getty Foundation has awarded the Salk Institute a $200,000 grant to support the conservation of Salk’s celebrated concrete façades. The grant project will take place over the next five years. The announcement is part of more than $1.7 million in architectural conservation grants announced by the foundation in 2018 for 11 significant 20th century buildings.

The new award will allow Salk to implement concrete conservation and set a new model for this prevalent and challenging modern building material. The repair program incorporates methods and materials that are similar to the existing materials in character and appearance while offering enhanced durability. A benefit to many more places besides Salk, the project will inform concrete conservation practices that can be used in buildings around the world.

Padres Pedal the Cause keeps on rolling 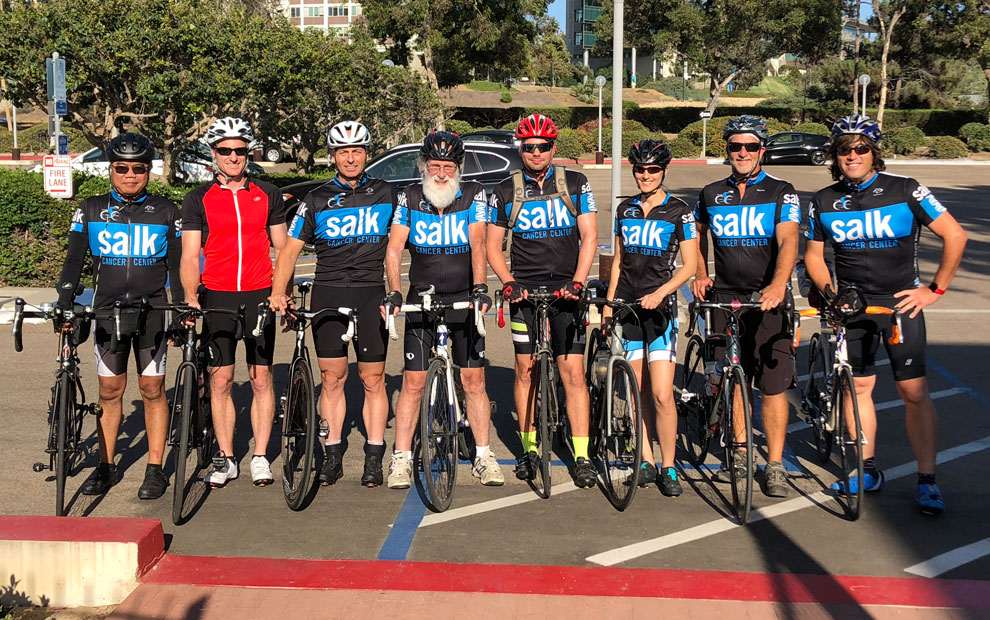 The 2018 Salk Cancer Center team featured 45 riders/walkers/runners and volunteers who joined together in support of leading-edge cancer research—more than 3,000 people participated overall. 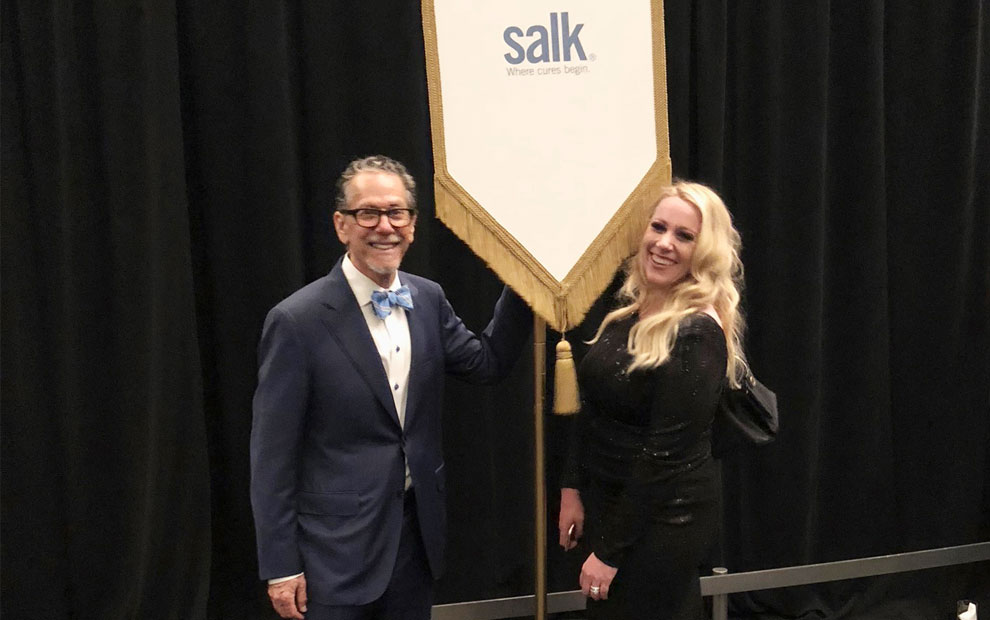 Associate Professor Janelle Ayres has been awarded a 2018 Pioneer Award by the National Institutes of Health (NIH) for her innovative research into host-pathogen interactions that promote the health of the host. The highly sought-after grant, which awards $3.5 million over five years, “supports scientists with outstanding records of creativity pursuing new research directions to develop pioneering approaches to major challenges in biomedical and behavioral research,” according to the NIH.

In addition, Ayres is the recipient of a $1 million grant from the W.M. Keck Foundation to study new ways to treat deadly infections, including sepsis and the flu, both of which require therapies beyond antibiotics and antivirals to be treated effectively. 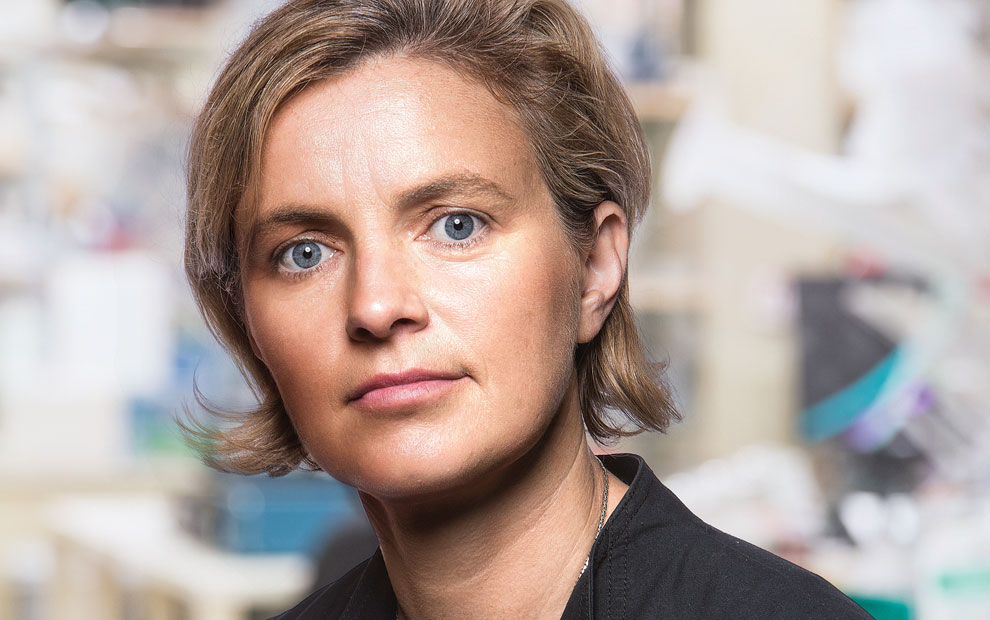 Clodagh O’Shea,, a professor in Salk’s Molecular and Cell Biology Laboratory and a Howard Hughes Medical Institute Faculty Scholar, has been selected as a recipient of The Paul G. Allen Frontiers Group’s Allen Distinguished Investigator (ADI) program. She will be awarded $1.5 million over three years to conduct research into how DNA and its associated proteins (known collectively as chromatin) are packaged in the nucleus of cells. The work has implications for better understanding not only a range of diseases but also the fundamentals of human biology. 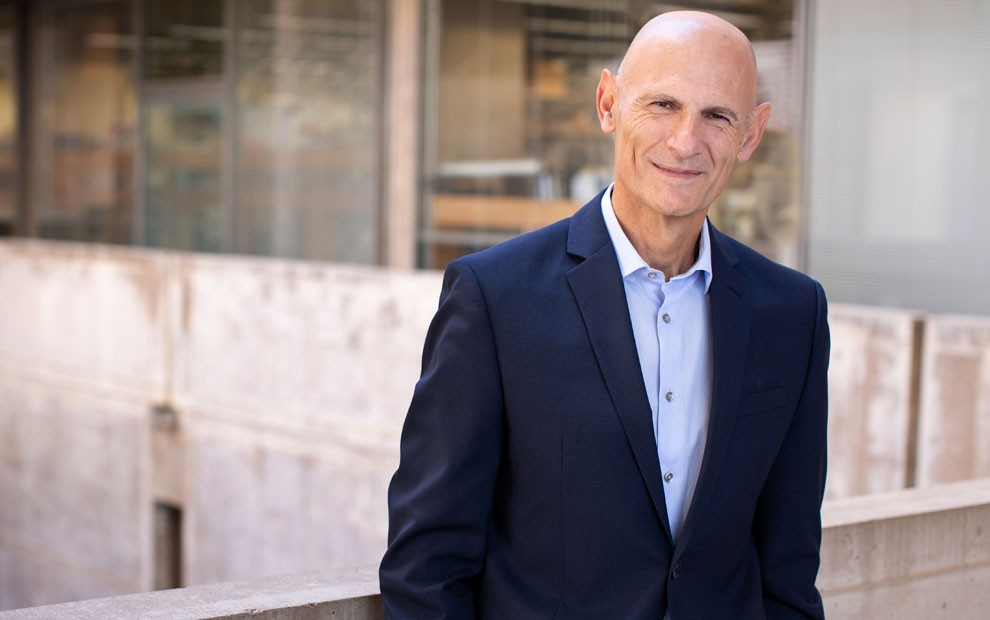 Juan Carlos Izpisua Belmonte, a professor in Salk’s Gene Expression Laboratory, has been named one of Time magazine’s 50 Most Influential People in Health Care for his scientific innovations in addressing the shortage of human organs for transplant. The list, which is curated by Time’s health reporters and editors, recognizes people who changed the state of healthcare in America this year and bear watching for what they do next.

Izpisua Belmonte, who holds the Roger Guillemin Chair at Salk, is globally recognized for his expertise in stem cell biology. Notably, in 2017, Izpisua Belmonte published a proof-of-concept study showing that functional organs from one species can be grown in another, an important early step toward addressing the critical shortage of human donor organs available for transplant.

Salk awarded $19.2 million by the American Heart Association-Allen Initiative to study Alzheimer’s and aging in the brain 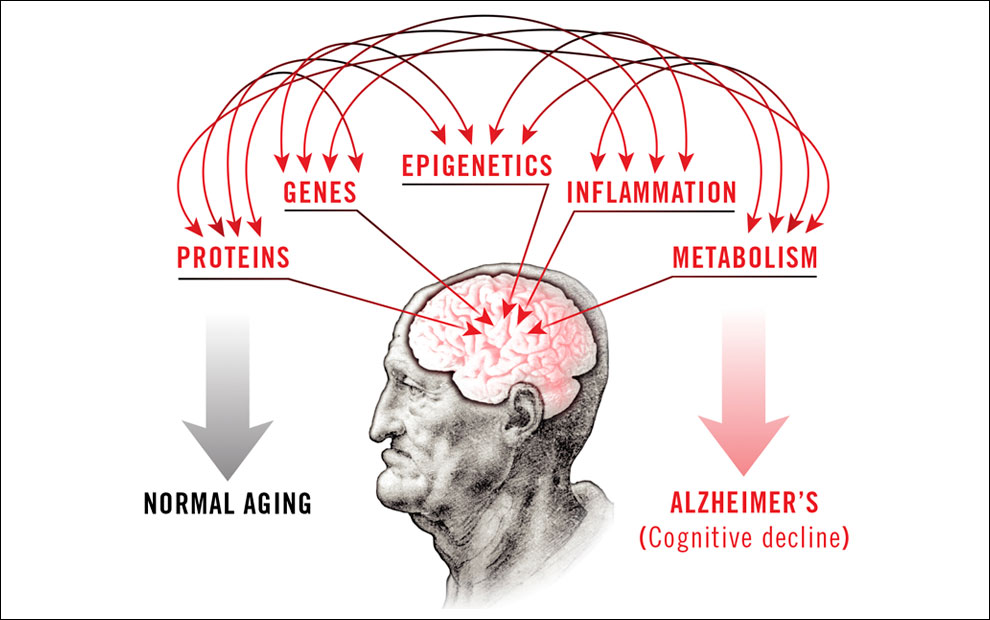 “At the Salk Institute, we have devised a completely new way of approaching Alzheimer’s and aging research,” says Gage, a world-renowned researcher in neuroscience and genetics who holds the Vi and John Adler Chair for Research on Age-Related Neurodegenerative Disease. “With the generous support of The Paul G. Allen Frontiers Group, the American Heart Association and other philanthropic donors to this initiative, we believe we can make significant progress in the diagnosis and treatment of Alzheimer’s and other age-related cognitive diseases.”

An aging-related disorder that results in severe memory loss, Alzheimer’s disease represents a global health crisis with estimates suggesting that 130 million people will be affected by 2050. To date, there are no therapies to effectively treat the disease.

To respond to this critical need, Gage will be leading a multidisciplinary team of 10 Salk scientists, all luminaries in their respective fields across metabolism, immunology and inflammation, genetics and epigenetics, and protein analysis. The all-star interdisciplinary group believes that Alzheimer’s and other age-related brain disorders are triggered not by a single event, but by a failure of complex, interdependent biological systems in our body that start to break down as we age. Failure in any one of these systems can cause a domino-like crash that results in devastating brain disorders like Alzheimer’s. By studying the networks that keep our brains healthy, the team aims to reveal new targets for therapeutic research and biomarkers of early stage cognitive decline.

“We are grateful for this support, which will help us learn more about the role of inflammation in Alzheimer’s and how it affects other cellular processes associated with this disease,” says Professor Susan Kaech, director of Salk’s NOMIS Center for Immunobiology and Pathogenesis, holder of the NOMIS Chair, and a member of the project’s leadership team. “We are hopeful this work will lead to the breakthroughs humanity so desperately needs.”

To accomplish this, Salk research teams are developing cutting-edge methods to study aging and diseased neurons and other brain cells through cell cultures, brain organoids and a new primate model of cognitive aging.

“Since the effects of aging are themselves comprehensive, taking a systems approach seems promising,” says Professor Jan Karlseder, a member of the project’s leadership team who directs the Glenn Center for Biology of Aging Research and holds the Donald and Darlene Shiley Chair. “We very much appreciate the generosity of The Paul G. Allen Frontiers Group and American Heart Association in supporting this research to advance our understanding of aging.”