In Memoriam A life in service to science and others: Walter Eckhart exemplified generosity and kindness

Considered one of the forces that contributed to Salk’s unique DNA, Walter Eckhart elevated the Institute’s cancer research to unprecedented heights of success, while showering those around him with generosity and kindness over a lifetime.

Eckhart, professor emeritus and director of the Salk Institute’s National Cancer Institute-designated Cancer Center and head of the Molecular and Cell Biology Laboratory for more than 30 years, died on June 21, 2022, at his home in La Jolla, California, at the age of 84.

He is survived by his wife, Karen Lane; her daughter and son-in-law, Jasmine Penick and David Penick, and their children, Shane and Emma; Eckhart’s sister, Elizabeth Nagle, and her husband, Jack Nagle; nephew Rob Nagle and his wife, Heather Allyn; nephew David Nagle, his wife, Siana Nagle, and their daughters, Imogen and Sally; and by his first wife, Karen Eckhart.

“Walter was a brilliant scientist, a wonderful person, and a terrific member of the Salk community. His career spanned from the origins of Salk as a bright and creative researcher through to current times, where he gave generously of his time and resources to support the Institute in many ways,” says Salk President Rusty Gage. “We miss him a great deal.”

The Institute hosted a celebration of life for Eckhart on its campus on September 2, during which time members of the Salk community shared fond memories of Eckhart—their colleague, mentor, and friend.

“I interviewed with Walter for a position as a laboratory technician in 1974. He took a risk on me then, a very young and inexperienced technician. He gave me a chance to learn, make mistakes, and mature under his kind and fair guidance,” said Suzanne Simon at the service. She worked alongside Eckhart for many years and had lunch with him daily. “Walter’s gentle manner and his willingness to take a risk on a young recruit is a theme you will hear repeated by the alumni of our lab.” 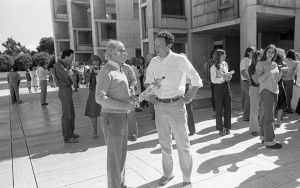 Eckhart joined Salk in 1965 as a postdoctoral scholar in the lab of Nobel Laureate and cancer researcher Renato Dulbecco. He went on to become one of the first assistant professors at the Institute in 1969.

“I was attracted by the world-class research being done at the Institute,” Eckhart said in an interview in the Fall 2022 edition of Inside Salk magazine. “The collaborative, interactive environment was exceptional.”

Eckhart was a leader in understanding the basic biology underpinning cancer. He studied regulation of cell growth, including the effects of cancer-causing genes (oncogenes), growth factors, and communication between adjacent cells (gap junctional intercellular communication).

“Walter played a key role in the early days of the Institute, being tasked to recruit the first cohort of assistant professors in the early 1970s and setting up the Tumor Virology Laboratory, which had many successes in discovering the molecular basis of cancer,” says Professor Tony Hunter, who followed Eckhart as Salk Cancer Center director from 2008 to 2016. “Walter was my postdoctoral adviser at the Institute and recruited me as an assistant professor in 1974, and without his mentorship and support, I could never have been so successful.”

“Without Walter’s steady leadership and literally decades of recruiting the top rising stars in cancer research from across the world, the Salk Cancer Center would not be the landmark of cancer research that it is today,” Shaw says. 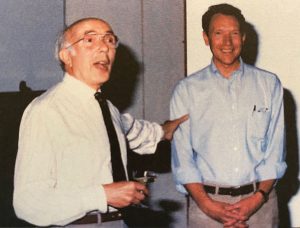 Eckhart was born in 1938 in Yonkers, New York, where he grew up. He attended Gorton High School in Yonkers and was the school’s newspaper editor and class valedictorian. Eckhart went on to attend Yale University, where he received a bachelor’s degree in biophysics in 1960. Upon graduation, he wrote to famed British molecular biologist Francis Crick, requesting to work for him in Crick’s lab at the University of Cambridge. Crick wrote back, kindly rejecting Eckhart, but that didn’t stop Eckhart—he continued to write to Crick until he finally relented and offered Eckhart a job.

Eckhart took a ship to England, and once on the Cambridge campus, he roamed around for two days, too nervous to meet his hero. He finally worked up the courage and went on to work in Crick’s lab for a year.

Following his stint at Cambridge, Eckhart worked at the Woods Hole Oceanographic Institution in Massachusetts in 1961. He then attended the University of California, Berkeley, where he earned his PhD in molecular biology in 1965.

Eckhart looked up to Crick, who shared the 1962 Nobel Prize in Physiology or Medicine for discovering the molecular structure of DNA. But it was a famed cancer researcher who drew him to the Salk Institute.

“When I thought about who I wanted to work with, one name came to mind—Dulbecco,” said Eckhart in a 2014 article in the San Diego Union-Tribune. (Crick, too, later joined the Salk faculty.) 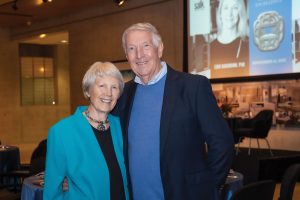 A welcoming listener and friend

Colleagues describe Eckhart as someone who was generous with his time and always willing to talk about whatever was on your mind, be it science or life.

“He seemed to always have time for people,” Gage said at Eckhart’s memorial service. “If you wanted to talk to him, he would just take the time and sit down with you. If he thought you needed it, he’d give you advice, and if not, he’d just nod and reassure you that you were on to the right thing. You’d move on, always feeling better having spent some time with him.”

“You didn’t have to make an appointment to see Walter,” added Gerald Joyce, Salk senior vice president and chief science officer. “You could just talk to him. Now, he did hold regular office hours—in the Courtyard, at the middle bench on the south side with his sandwich—so I knew I could always catch him there at noon, and he was happy to talk about anything.”

At the memorial service, former Salk chief science officer Martin Hetzer shared that Eckhart put him at ease from the moment they met in 2003.

“He was genuine, unassuming, unpretentious, and very calming,” Hetzer said.

“He was that quiet presence who could be counted on for thoughtful, sensible advice,” said Professor Geoffrey Wahl, who was hired by Eckhart to join Salk in 1980 and spoke at the memorial. “More than that, Walter possessed this unique capacity to reduce the stress in any situation, sometimes just by listening, or offering a warm smile, or saying a few constructive words. He had this Zen-like ability to cut through tension.” 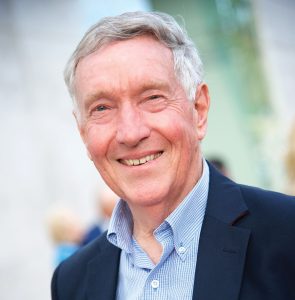 Generous to the end

In the Winter 2020 issue of Inside Salk, Eckhart explained why, after decades of hard work and scientific excellence as a faculty member at the Institute, he felt he could do more to further Salk’s mission.

“I go back to a famous Jonas Salk quote: ‘The reward for a job well done is the opportunity to do more.’ I think about that often when it comes to giving,” Eckhart said. “I’ve worked in basic research my entire career, so I can tell you the impact basic research has on society is far-reaching. I also think it’s important to know that Salk is training the next generation of scientists.”