The largest grant in Institute history has established the new Center for Multiomic Human Brain Cell Atlas to detail the many individual cells that make up the human brain—their molecular features, where they are found, and how they change with age.

With a five-year, $126 million grant from the National Institutes of Health (NIH), a team led by Salk Institute scientists has launched the new Center for Multiomic Human Brain Cell Atlas. Part of the NIH’s Brain Research Through Advancing Innovative Neurotechnologies (BRAIN) Initiative, the project aims to describe the cells that make up the human brain in unprecedented molecular detail, classify brain cells into more precise subtypes, and pinpoint the location of each cell in the brain. What’s more, the team will track how these features change from early to late life. 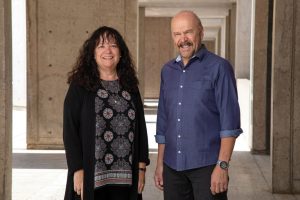 The goal is to better understand how neurotypical human brains work and age. The project will also establish a baseline against which scientists will be able to compare brains with neurological or psychiatric conditions, such as Alzheimer’s disease, autism, depression, and traumatic brain injury.

“The brain map we develop could help point disease researchers in the right direction—for example, we could say, ‘That’s the region of the genome, in that specific subset of neurons, in that part of the brain, where a molecular event goes awry to cause that disease,’” says center leader Professor Joseph Ecker, director of the Genomic Analysis Laboratory at Salk and Howard Hughes Medical Institute investigator. “And ultimately, this information might help us design gene therapies that target only the cell populations where the treatment is needed—delivering the right genes to the right place at the right time.”

Salk will be awarded approximately $77 million of the center’s funding, making it the largest single grant the Institute has received in its 62-year history.

The Center for Multiomic Human Brain Cell Atlas, part of the NIH’s new BRAIN Initiative Cell Atlas Network, builds upon a five-year effort to map the mouse brain, a project that was known as the BRAIN Initiative Cell Census Network. A special issue of Nature published in October 2021 described the results of that effort, including how different cell types are organized and connected throughout the mouse brain.

“Similar to the way we learned about space travel from short trips to the moon, the mouse brain mapping project taught us a lot about how to approach a much bigger brain and the types of genomic information we would need to be able to truly map the human brain,” Behrens says. “This project is an example of how fruitful teamwork can be in science—these types of projects cannot be accomplished in a single lab.”

In the Center for Multiomic Human Brain Cell Atlas, researchers will examine 1,500 brain samples (30 human brains ranging in age, 50 regions each). The center is concerned mostly with epigenetics—the molecular events that influence whether genes are turned “on” or “off” in a given cell type or at a particular time—rather than genetic sequences of each cell. The center will also take into account which cells live where. Location is important because cells talk to each other, Ecker says.

“Essentially, we want to take millions, even hundreds of millions of brain cells, learn everything we can about their epigenetics and how their chromatin is arranged, and project them in a spatial context so we can see where these cells live and understand how all of the cells in any brain region are organized, and at any age,” says Ecker, who also holds the Salk International Council Chair in Genetics.

Scientific discovery at the Salk Institute is made possible through your annual contributions. Your support will accelerate the pace of breakthroughs in understanding disease and pave the way to new drug therapies.